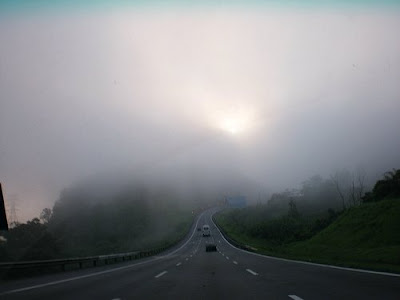 The Karak highway was known for its many haunting stories, told by the many eyewitnesses who drove on the highway. There are a lot of scary rumors that Karak Highway haunted. Some people claim that it's because there's a lot of accidents and deaths. Others believe that the grounds on which Karak highway was built upon was said to be the burial grounds for the aborigines ( Orang Asli )  which  was already haunted to begin with. All this myths causes Karak Highway became a fearful area for motorists especially during the night due to the many stories shared by motorists who have experienced some of the haunting while travelling along the highway. So most motorists will avoid this route or travel here in the day time. Many believe that if someone travel here just as a challenge even after they know well about this place, then they definitely face the consequences.


There were reported sightings of a yellow Volkswagen on the highway. It could be appearing from nowhere and when we look into the car, no driver was spotted in the car. The yellow car could be driving slowly on the right lane, thus making others try to overtake it. When you overtake it, you would realize that there is no driver in it. Most motorists have been warned to not overtake the car or it will keep appearing in front of you. Other instances could be the car would try to speed up once it had been overtaken by you and then disappear just like that out of your sight.


A little boy had been spotted on the highway. Many believe  that the boy and his mother was involved in one of the many accidents that took place on the highway and both were killed. Their bodies could have been thrown into different locations, separating the mother from her son and thus the little boy's restless spirit is constantly looking for his mother. He could appear at the side of the road, and seemed like he is looking for something  and try to stop your car. The next thing you know, he could be appearing next to the car and running along it and would be asking the same question over and over again, "Have you seen my mother?"Will you answer him???

mondershahbon
WELCOME TO OUR BLOGS. THIS BLOG ABOUT THE GHOST STORIES PLACE THAT HAPPENED IN MALAYSIA.